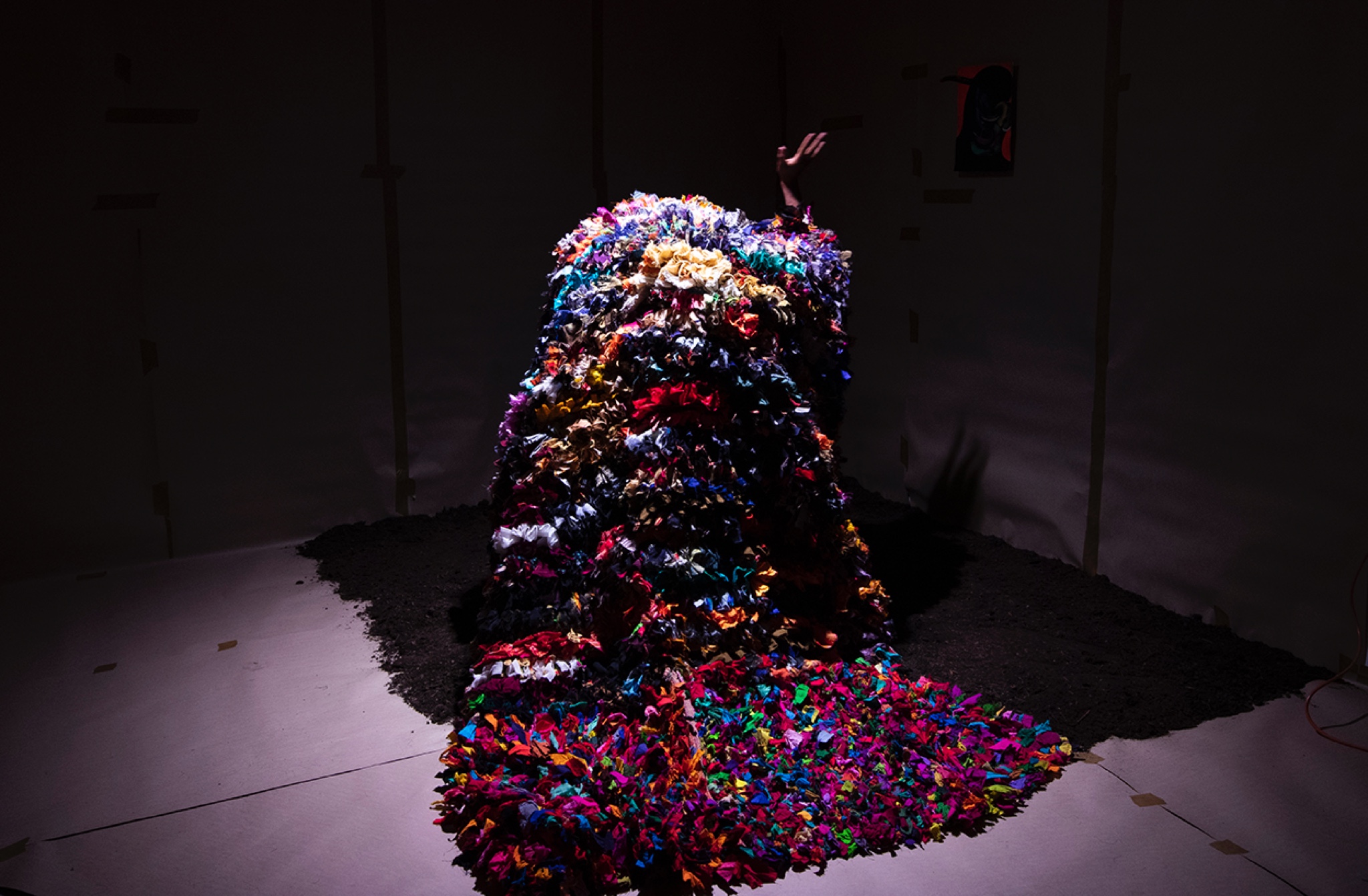 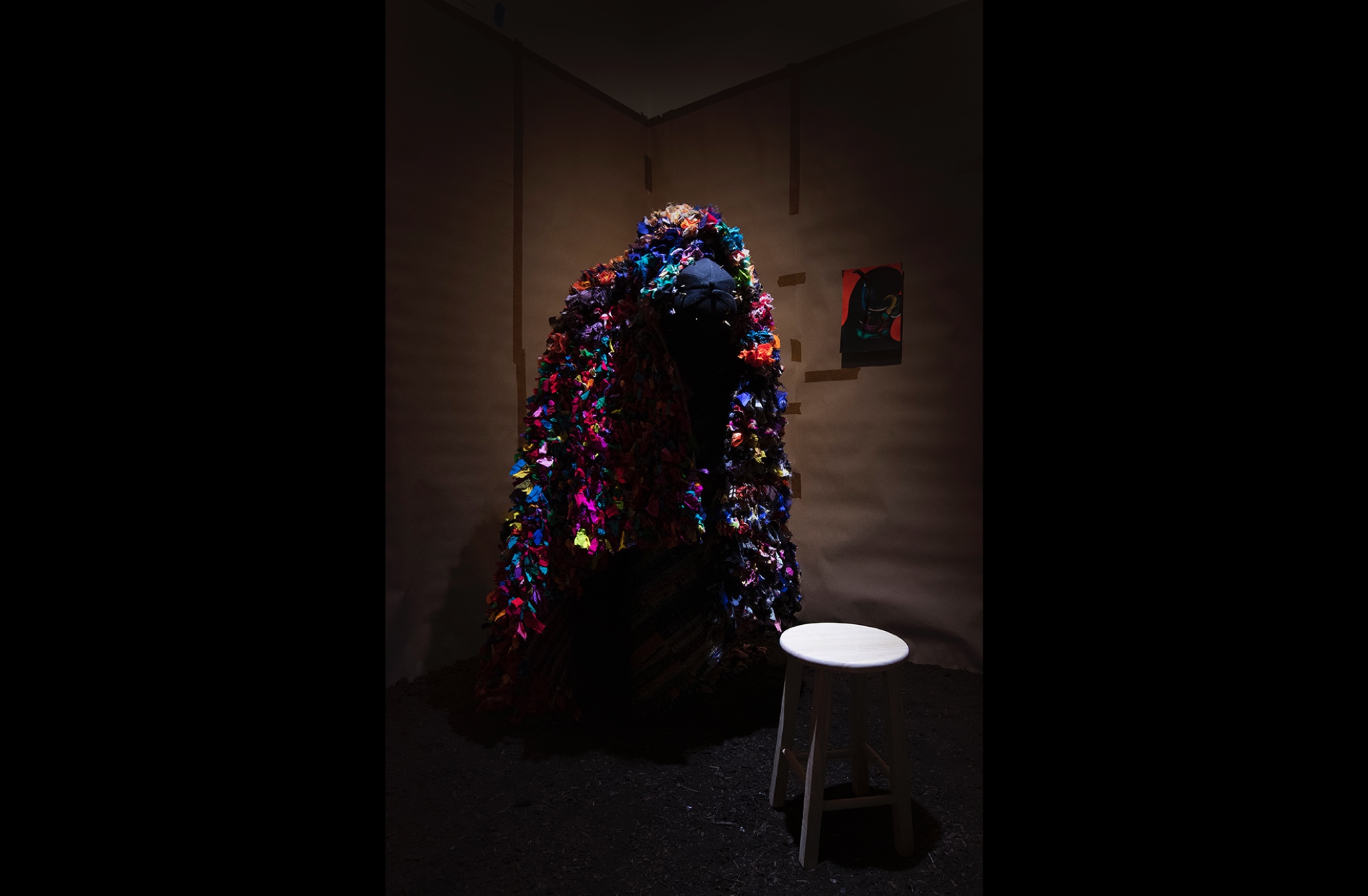 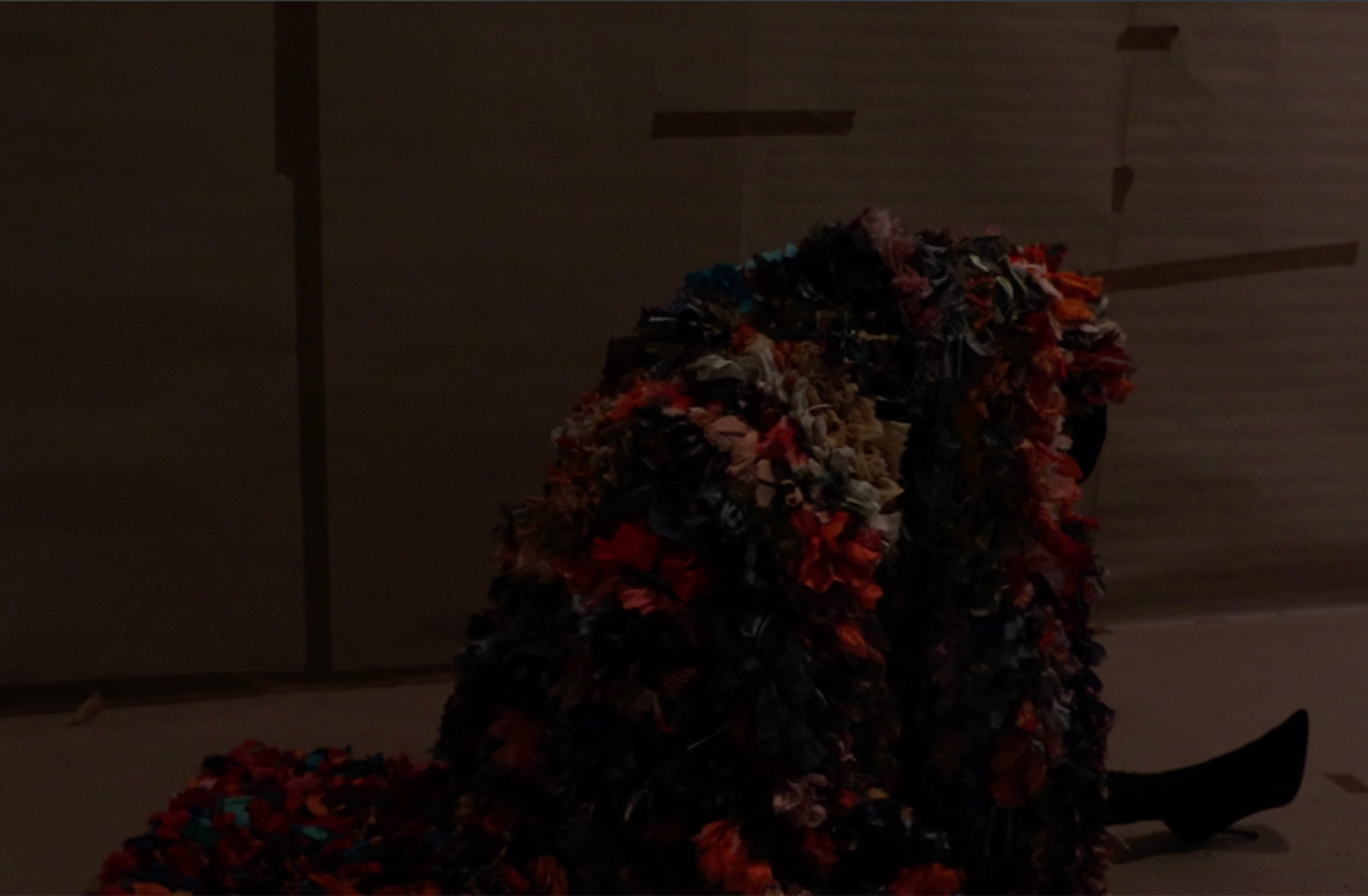 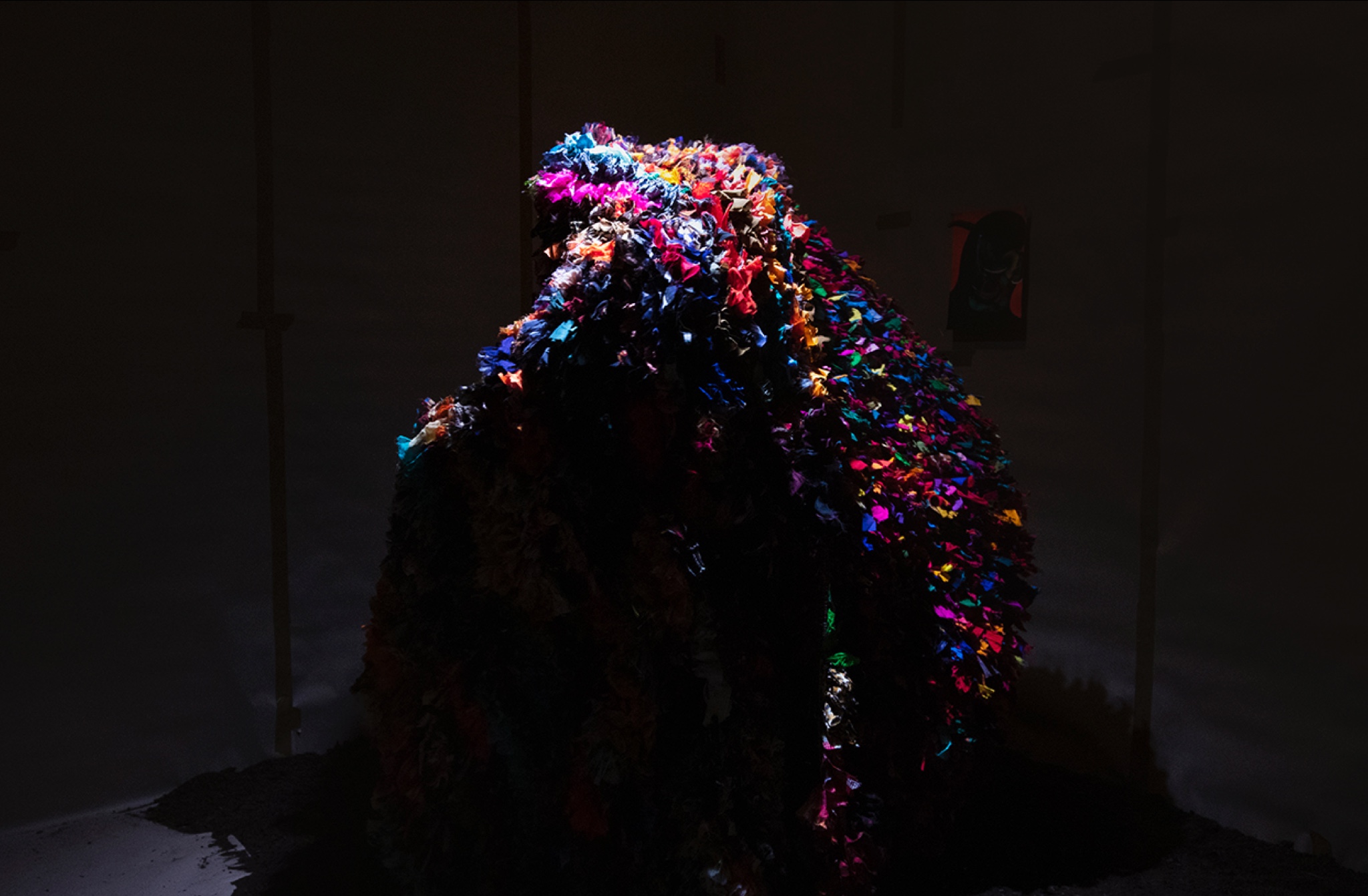 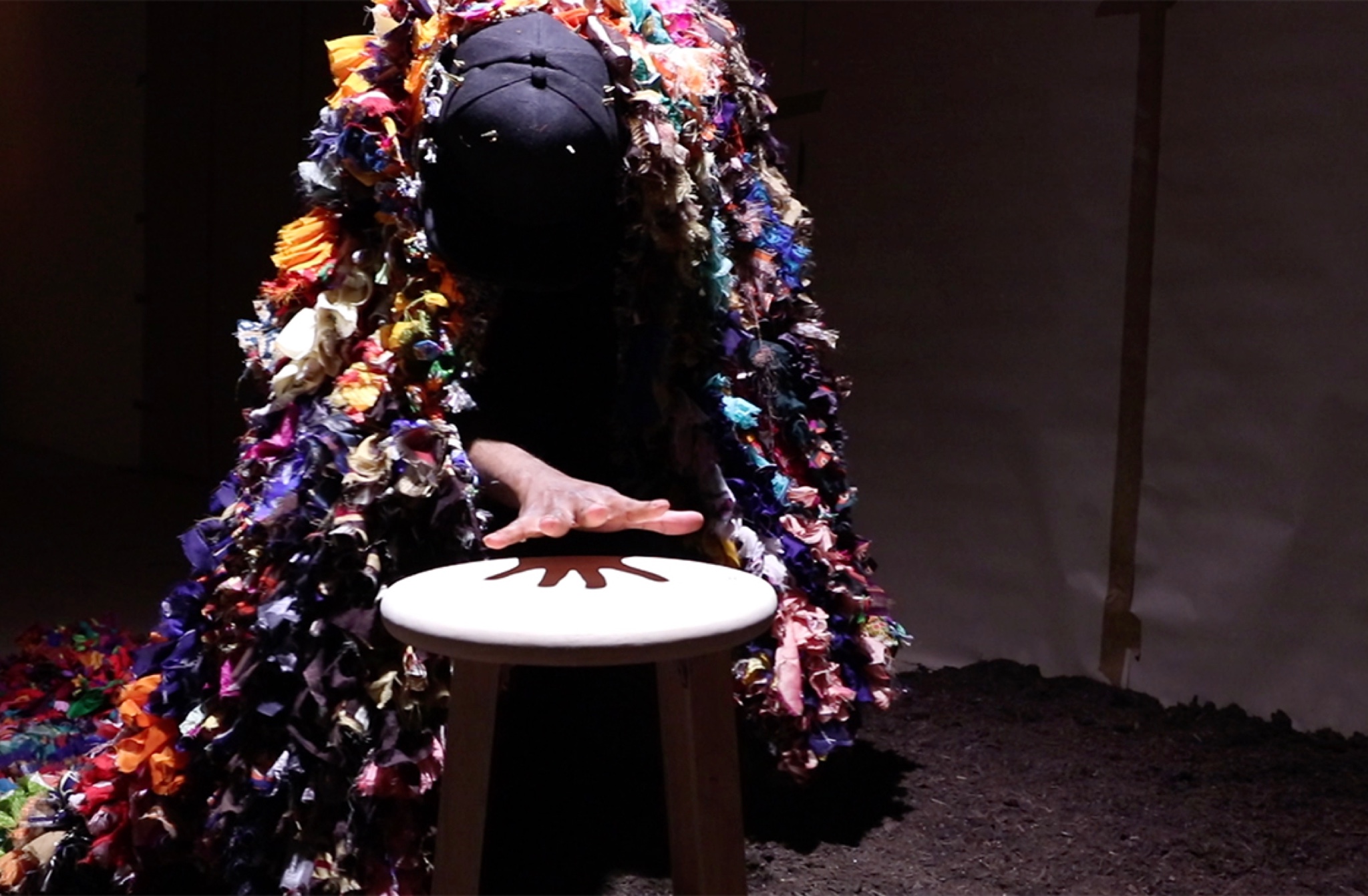 The character in this performance is composed of shaggy recycled fabric textiles, yet its form is achieved through the contortion of the performer’s body. The performer holds an object made of baseball caps assembled to resemble an orb. The object adorned with brass spikes behaves as the character’s head while the textile obscures the rest of the body. The task for this performance is to give life to this ‘creature’ while upholding ‘prescribed standards of masculinity and femininity’ bearing the weight of the performance, until eventually the body collapses under the strain. The orb representing the creature’s head (replacing the usual mask to anatomically match the head) is actually performed by the sitter’s hand, while the other hand assists the rest of the body in movement. The 45.5 sq. ft. / 68-pound quilt is then draped to obscure the real body. All of this happens while the artist is wearing a pair of 4-inch heels. The end result brings to life something unrecognizable, monstrous in its presence despite its innate beauty.

The environment the character inhabits plays an important role as well, composed of soil, brown paper walls, a stool, and a portrait mounted on the wall with a ratchet knife. These are supposed to represent an interior space—an entrapment, a shrine of reflection on fear and isolation. The darkness is illuminated by a single bulb hanging from the ceiling. In this surreal space with great gravity and loneliness, I wanted the performance to reference Bacon’s painting Portrait of George Dyer Talking (1966) and Three Figures and Portrait (1975) as an extension of my painting practice exploring psychological interiors and mythological beings born from forbidden love. These images are part of an ongoing practice interested in making space for what I feel has been ruptured through the effects of colonialism.

The performance is partly inspired by a coming-of-age ritual for boys called n-khanda from the Yaka tradition. Some aspects are inspired by masquerades in West African countries such as Benin. More nearly, another source of inspiration is Junkunoo, specifically the character Pitchy-patchy from Jamaica. My interest here comes from using materials and substances for the evocation of spirits/ higher planes of existence. Painting as a studio practice makes reference to these kinds of material / bodily effects through performance with a brush in hand. The use of materials as spiritual portals for the body has a long standing presence in Africa / the Caribbean and the diaspora. This is one attempt in my own practice to bring both philosophies together. 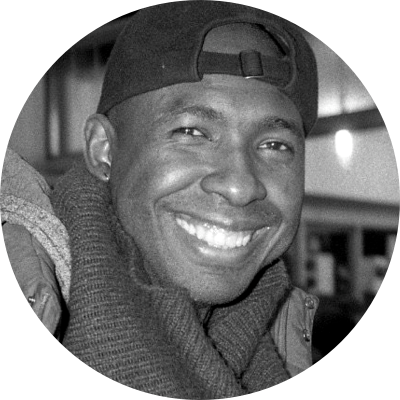 Working in a multiplicity of mediums, Leasho immortalizes the dynamic energy of the Dancehall and engages with black stereotypes and spectrums as expressed in Jamaican/Caribbean cultural practice. His characters often merged specific materials with new narratives around gender and identity, whilst utilizing both traditional and contemporary approaches around ancestral and personal stories.

Leasho Johnson is a recipient of the prestigious New Artist Society Scholarship in 2018 from the School of Art Institute Chicago, where he graduated in 2020. He obtained his BFA in Visual Communications at Edna Manley College of the Visual and Performing Arts in Jamaica In 2009. His works can be found in the permanent collections of the National Gallery of Jamaica and noted Collectors. He participated in several historic exhibitions both Caribbean-wide and internationally including the United States, The United Kingdom, France, Brazil, and the Netherlands. He is a member of the Caribbean Art Initiative and a founding member of the group Dirty Crayons. Leasho is currently a part-time lecturer at the School of Art Institute Chicago.